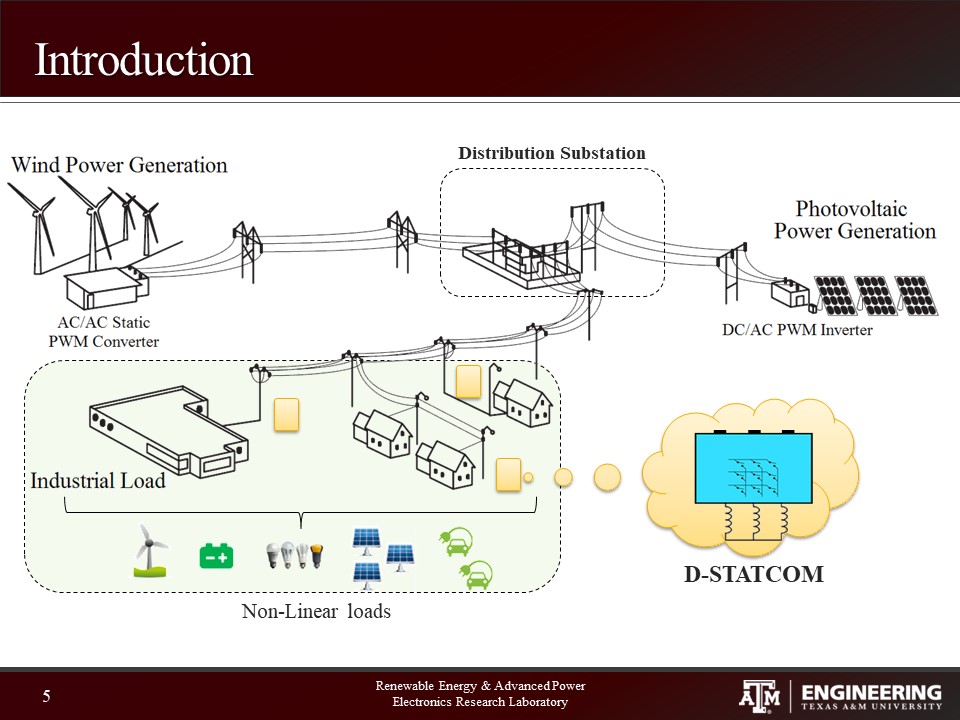 Modern electrical loads present non-linear impedance to the electrical system and hence draw harmonic and reactive power, both of which have deleterious effects on the efficiency and reliability of the power distribution system. Further, the paradigm shift from central generation and control to distributed generation, storage and local control adds complexity to the operation and control of the electrical power grid. Thus a widening chasm exists between the traditional concept of providing bulk electricity, acknowledged by the U.S. National Academy of Engineers as the greatest engineering achievement of the last century [1], and providing reliable, high-quality electricity [2] needed to support Qatar’s growing economy and the Qatar National Vision 2030.

Power electronics provides a flexible platform to address the issue of power quality. Instead of large banks of filters and capacitors which have limited (if any) adjustability once design and deployed, the static synchronous compensator (STATCOM) can be continuously tuned to adjust the amount of volt-ampere reactive power (VAR) produced to compensation the power system and compensate power factor and improve voltage regulation.

The most popular topologies are based on a voltage-sourced inverter (VSI) that uses electrolytic capacitators (e-caps). The challenge with e-caps is that they have well-known failure modes [3] due to both sudden stress (overvoltage) and accumulated fatigue (electrolyte dry-out) [4-10]. Thus in commercial products the capacitors need to be derated, which adds material cost to the design, and/or monitored and periodically replaced [11-13] which adds operational cost and decreases the system-wide reliability. Juxtapose the service life capability of a e-cap solution with the reliability expectations of other components in the electrical system: nearly 50% of the transformers in a power system have been in service for more than 35 years [14]. This is over 300,000 hours of service, nearly 40x the rated base lifetime specified by e-cap manufactures. The service life of the e-caps is further limited due to the high ambient temperatures experienced in Qatar which hastens the degradation. Thus e-cap based solutions for power quality compensation are fundamentally not well suited for the long service life required by the electrical power industry.

A model predictive controlled, matrix-converter-based power quality compensator (MPC-MC-PQC) is proposed that is capable of achieving a service life of four decades or more by not using electrolytic capacitors. The concept is to develop a power quality compensator optimized for the distribution system, thus providing power quality compensation at the point of load to mitigate reactive power and harmonic power at the origin rather than upstream in the power system where it already has deleterious effects on reliable and efficient operation of the system.

Copyright © 2019 REAPER Lab and its contributors. All rights reserved.